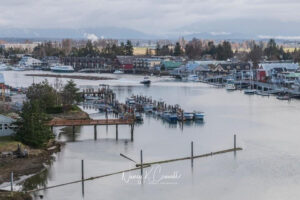 It’s getting hot, hot, hot here in the Southwest and finally warming up in the Pacific Northwest. We head back north at the end of the month and are looking forward to a long summer season of gardening and boating and catching up with friends and enjoying time with family. Here’s a pic of our great little town of La Conner, courtesy of local photographer Nancy Crowell.

Hardland is off to print for advanced reader copies and still on schedule for the September 13 release date. You can preorder now at your local independent bookstore or online (Amazon, IndieBound, etc.)

More blurbs are coming in:

“Open the pages of Ashley Sweeney’s wonderful new book, Hardland, and you’ll find yourself in an 1899 Arizona Territory town so authentic you can smell the dust and feel the hot wind that brings it. As Sweeney’s charismatic and resilient character, Ruby Fortune, says, you “have to grow scales to survive here.” Ruby is as vivid and unforgettable as characters come, and you’ll find yourself turning page after page as her life unfolds—because in Sweeney’s hands, Ruby’s life becomes as real as your own.” —Susan Lang, WILLA Literary Award-winning author of Small Rocks Rising

“A powerful and gripping tale of survival and triumph over abuse, misogyny, and economic challenges. It rings as true in the 21st century as it did in the time frame in which it is set. A must-read!” —Jim Jones, award-winning author of The Lights of Cimarrón

Thanks, Susan and Jim!

I’m honing in on an idea for my fourth novel, which will be set in the American Southwest. More details to come in upcoming newsletters!

Congratulations to Ann Rubin Dominick and Mark Atkins for winning a deck of cards with the cover of Hardland.

I began in my early teens writing (at times, some very bad!) poetry. It’s a practice I’ve kept up over the years to hone my thoughts and play with language. One of my favorite ways to tap into where I’m at on any given day is to write haiku.

According to Wikipedia, haiku developed in Japan in the 17th century, an offshoot of the hokku, the opening three lines of a longer poem called a tanka.

The poetic form of haiku is three lines: the first line containing five syllables, the second, seven syllables, and the third, again five syllables, for instance:
The answer will come (5)
Quiet as pattering rain (7)
Unbidden and clear (5)

This month’s challenge is for you to try to put world events, political fractiousness, and everyday life aside and pick up your pencil or pen, sit/go to a favorite place, and scratch out a haiku. Don’t think too hard about it. Just write. Send me your samples at contact@ashleysweeneyauthor.com I’ll choose three or four of your entries and post them in next month’s newsletter. Then you, too, will be a published poet! 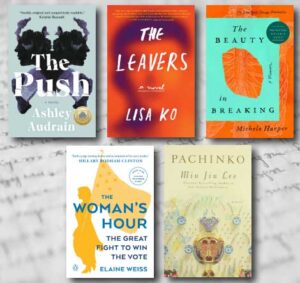 Congratulations to sister Wheaton author, Janis Robinson Daly, who will publish her debut, The Unlocked Path, in August with Black Rose Writing. For more info on Janis and her upcoming book, visit:

I’ve been immersed in other worlds for the past few months as a preliminary judge for a national writing contest and finishing up blurbs for a half dozen other authors, as well as keeping up a robust reading schedule. A recent favorite was the WILLA Literary Award winner and Langum Prize runner-up The Glovemaker by Ann Weisgarber. A great read.

Until next month, wishes for a peaceful world, and Happy Reading!