Before my next newsletter is out, I will have participated in the Orcas Island Lit Festival June 3-4 on beautiful Orcas Island in Washington’s San Juan Islands. Editor Mia Lipman Irwin will moderate the panel I’m on that also includes sister Nancy Pearl Book Award winner Kelli Estes (The Girl Who Wrote in Silk; Today We Go Home), Vauhini Vara (The Immortal King Rao), and Nicola Griffith (Hild; So Lucky; Spear). We’ll be discussing women who have been overlooked in history, and how our protagonists work through familial, financial, and societal barriers to exert agency in their worlds.

Looking forward to staying with long-time friends Geoff and Janet Hamill on Orcas and relaxing on island time. And meeting my author crush, Timothy Egan, author of, among many other titles, The Immortal Irishman and Pilgrimage to Eternity.

Advanced reader copies of Hardland are off to reviewers. Now I wait. And wait.

In the meantime, I’m off to Ireland in my mind as I begin a novel based loosely on my great-grandmother’s life. Mary Agnes Coyne came alone to the U.S. in the 1880s at age 13 and lived a colorful life. I’m taking liberties with her story and enjoying talking to my 93-year-old author father, Gerald F. Sweeney, about his Gram, who helped raise him in Chicago in the 1930s.

My plan is to spend a month in Ireland next spring doing extended research. Fingers crossed. Pub date is Fall ’24 with She Writes Press.

And I have another idea brewing . . .

She Writes Press is publishing an anthology of women writers in June titled, Art in the Time of Unbearable Crisis. I’m thrilled to be part of this visionary endeavor, with all proceeds benefitting World Central Kitchen.

Two years ago this month, Answer Creek hit the shelves. It’s been a great success, and continues to steadily add readership. It wasn’t easy launching at the onset of COVID, but Ada Weeks’s story has touched thousands of readers. Available wherever books are sold.

You must be a very shy bunch, because I only received one entry for the Haiku challenge. Thank you, Tisha O’Neil Smith, for submitting your delightful entry.

“It was book club day today…we read Silas Marner…it was so good!  This is what I was thinking yesterday:

I haven’t made one up for years…you were right, just pick up a pencil and write…so I did.”

Thanks, Tisha! You’re now a published poet! And a great friend. 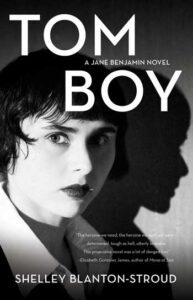 Congratulations to critique partner Shelley Blanton-Stroud on the upcoming release of Tomboy, the second in her Jane Benjamin series.

It’s 1939. Jane’s got five days at sea to solve the murder of a Wimbledon champion’s coach and submit a gossip column that tells the truth. If not the facts.

And these endorsements from two other critique partners:

“Riveting as Mare of Easttown, binge-worthy as The Queen’s Gambit, Tomboy will keep you reading—obsessively—until the very last line.”
—Debra Thomas, author of Luz

I was thrilled to speak with the Facebook Third Thursday of the Month Book Club in April. Some of their next reads include:

The Next Ship Home, by Heather Webb

The Diamond Eye, by Kate Quinn

Like many of you, I’ve caught the Wordle (and Dordle, Quordle, and Octordle) craze. If you haven’t tried The New York Times word game yet, each day you get six chances to guess a five-letter word. It’s fun . . . and addictive. I’ve been at it for months now and haven’t been skunked yet! And I learned a new word: Hapax. You’ll have to look it up to see what it means!

Until next month, Happy Reading!